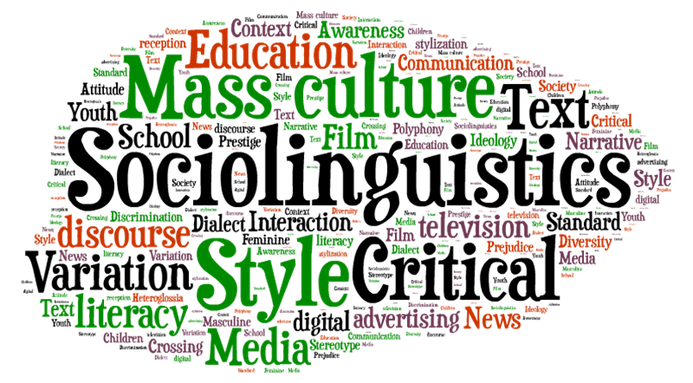 Children and the (social) media
Children are immersed in practices related to popular culture, the media and new technologies from birth. They are growing up in a digital world and developing a wide range of skills. Moreover, they live in a media-saturated world in which texts have multiple connections with others, since their favorite popular heroes appear in a wide range of objects such as toys, books, comics, clothes, food packaging, and others. As a result, popular culture and the social media play a central role in the shaping of children’s out-of-school literacy practices. Even at very young ages, children tune into programs that can influence their literacy development. If children are encountering these texts in a wide range of media outside school, then it makes sense for them to be able to analyze, understand, respond to and produce texts using these media at school.

From linguistic variation to sociolinguistic style
Early sociolinguistic tradition, traced in the seminal work of Labov on the social stratification of English in New York City, and rooted in modernist assumptions about society, has presupposed a rigid social hierarchical model and a rather fixed conception of social categories. Hence, through generalizations, abstractions and statistical tendencies, the aim of this tradition has been to disclose how social structure is reflected in linguistic variation.
In contrast, contemporary sociolinguistics is informed by the epistemology of social construction, as a response to the constant mobility, fluidity, and fragmentation characterizing identity in late modern social life. It undermines the idea of social categories as pre-defined dimensions of social structure but looks into people’s moment-to-moment negotiation and projection of identities in discursive social action. Hence, language use is not statically seen as “linguistic variation” which reflects a ready-made social meaning, but as "speech/ sociolinguistic style”, namely as a resource for meaning making in context.

Popular culture vs. everyday language and the ideology of authenticity
Early sociolinguistics has sought to capture the “authentic speaker”, by striving to overcome the “observer’s paradox” and collect “naturally occurring” speech coming from everyday conversational data. In this context, media and popular cultural discourse was considered to be “inauthentic”, and thus it has been a largely neglected area of sociolinguistic research. Yet, contemporary sociolinguistics has deconstructed the ideology of authenticity so much appreciated in traditional sociolinguistics, having developed theoretical concepts such as “crossing”, “styling” and “stylization”. All these notions have put a stress on the issue of linguistic performance and representation, found not only in mediatized settings but also in everyday conversations.
On the other hand, determining the extent to which the mediation of sociolinguistic style diverges from supposedly “authentic” instances of language use as found in everyday communicative events seems to be one of the key concerns in the relevant literature. The idea that popular culture should “live up to an ‘authentic’ model” is related to “reflection fallacy” (Androutsopoulos, 2010: 749). Yet, the "linguistic turn" in the social sciences has led to the recognition of the role of (popular cultural) discourse in shaping to a large extent rather than simply reflecting the world "out there". In this view, popular cultural discourse should be analyzed as such, without any hypotheses being made concerning everyday talk. Hence, taking into account that the media do not usually intend to search for accuracy and “faithfulness” in the mediation of sociolinguistic style, namely that they constitute stylized representations of society with varying degrees of realism, it is pointless but also irrelevant to compare the "authenticity" of everyday talk with the "simulacrum" of fictional discourse.
Consequently, a more fruitful approach would be to acknowledge the ideological framework upon which popular culture operates, which constructs a particular version about language and the world. In this view, popular cultural discourse should be analyzed in its own right, exploring how it shapes viewers’ understanding about the speech of social groups and of the way it eventually perpetuates or challenges certain social and linguistic stereotypes. Thus, while children watch cartoons or commercials on TV, they are also taught linguistic prejudice and social discriminations. The aim of this project is to enable children to challenge hegemonic (language) ideologies in popular culture and the social media through the development of their critical language awareness.